Sale on canvas prints! Use code XBCPFY at checkout for a special discount!

Featured And Quoted By China Daily On 15th March 2019 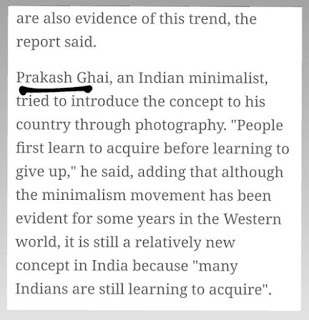 Featured and Quoted by "China Daily" on 15th March 2019 in the article "More turning to the bare essentials of life."

The quote that was quoted: "People first learn to acquire before learning to give up."
I brief the Chinese reported about how I view Minimalism in my life and my work and how much of it is picking up as a movement in India. 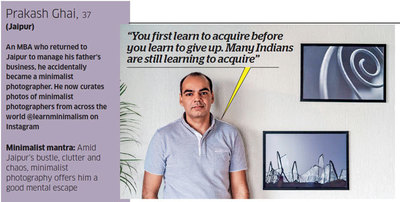 Featured by "Economic Times Sunday Edition" on 7th October 2018 as a Minimalist Photographer among people practicing Minimalism in India in the article titled "Less is more: Why affluent Indians are going minimalist"

- Tired of frenzied consumption, many Indians are embracing minimalism to declutter their spaces & minds.

Some people practice Minimalism in their music, some in fashion, while some in music or in general their Lifestyle. My Minimalism is in my photographs. I declutter in my visuals.